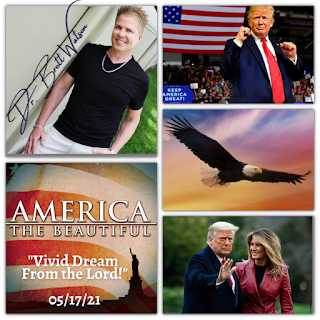 As I awoke this morning 05/17/2021 @ 8am with a Very "Vivid Detailed Dream" along with the full meaning from the Lord. The dream is as follows and the interpretation and Word of the Lord is underneath. 🔥🔥🔥🔥🔥🔥🔥🇺🇸🇺🇸🇺🇸🇺🇸🇺🇸🇺🇸🇺🇸

Here is the Dream:

The dream opened up with President Donald J. Trump surrounded by people asking him questions. He looked over at me and came over toward me. He put his arm around me and introduced himself.

He was so genuine and I sensed a "Fathering - Protective Mantle" that rested upon him.

I said, "We are praying for you and standing with You Mr. President." He said, "Thank You" and then opened conversation with me, talking about Florida and and how strategic that it is.

He talked about how he loved the state of Florida and the beautiful people here.

In the next part of the dream, he was with all of Us - "The People." He was in his suit and tie, submerged in water, swimming with all of us, with his head above the water, doggy paddling and then shouted to all of us around him in the water:

"KEEP YOUR HEADS ABOVE WATER AND KEEP MOVING FORWARD, IT'S ALMOST OVER!"

He then got out of the water with his wet suit and tie on and said, "Brett I need to get my suit cleaned for "My Appointment that is coming up soon!"

He looked at me and said, "I'm coming back soon." Then he asked me a question, "Brett can You sing one of my favorite songs, "America The Beautiful?"

I said, "Yes, Mr President! I'm available to assist you with whatever you need me to do."

The dream shifted and we were now in another place where there were bags all around him. I reached over to carry his bags that surrounded him and he said, "Thank You Brett, but I've got them. Again, thank you for all of your help."

Then, he looked at me and said, "Brett, I will carry your bags as well." He reached over and grabbed mine and began carrying them as well.

He smiled at me and said, "It's all because of God!"

Here is the interpretation of the Dream and Word Father God gave me.

Father God said, "Florida is very important to Me and is a "Very Important Key" to the Presidency, America and "My Plan" for "My Glory" being released in America and the world!

He said, Florida is Hosting My Glory and the Portals that have been prepared through the years from My intercessors are Now ready! It's  "Time" for the Harvest and the release and Manifestations of "The Supernatural!"

God said, "My Son Donald, Loves America. I have placed upon him a mantle to Father, Protect and Defend America at all costs! America is at the forefront of it's Greatest Days of Victory and Triumph!"

The Lord said, "The water in the dream represented the oppression we have had to face with the illegitimate leader, satanic agenda and administration. The Villan that sits in the seat of "My Trump" has caused the heaviness to come. Many are barely "Treading Water" spiritually, but "My Trump" has not stopped working behind the scenes with his hand in mine, to bring America back to it's Glory again.

He is still directing and encouraging the people to remain steady and move forward to Victory! Oh Yes, All will be reversed that the enemy has thought to have accomplished under his evil pawn.

God said, "I will disrupt it and destroy their agenda, unseat the villan and I will bring My Trump back, with "My Agenda and My Will" for America."

God showed me - The fact that President Trump was wearing his suit and still swimming with all of us, meant he was with us, has always been with us and has been encouraging us to never give up.

God said, "He Is "My Leader" and a "Father" to America. He has a "Spirit of Encouragement" upon his shoulders that I have placed upon him!"

The Lord said, "The suit and tie President Trump wore in the dream, represented "Work" that has been happening to bring America back, but God said, it also represented the past and the heavy attacks he had to endure."

When President Trump turned to me and asked me to get his suit cleaned for his upcoming appointment - God said, "I am bringing him out of it all along with a New America! She will stand up in Beauty and Victory once again. I will clean the past and place upon her and "My Donald" - "New Garments" to lead a "Glory Filled America!" 🔥🔥🔥

"I am bringing him back soon," says the Lord!

God spoke to me directly and said, "Brett when President Trump asked you to sing the song "America, America the Beautiful," this was "Prophetic" as to how I see America and how My son Donald sees America!

God said, "I have raised up many to "Stand - When done all, Stand - Raising the arms of "My Trump" and Banner of Freedom, to never stop fighting for "America the Beautiful!"

Lastly, as the dream closed, I asked the Lord why there were so many bags around President Trump and why he wouldn't allow me to carry them, yet he carried my bags as well?

The Lord spoke immediately and said, "He is a servant Brett. He is a leader because, he has served and understands the "Law of Leadership." Before you can lead, there must be a season of servanthood."

"My son, serves Me and the People of America." He leads from a Servant's Heart. The bags represented "Transition and His Mandate."

My Trump couldn't allow you to carry His bags, because it is His "Assignment and Mandate" he alone has to carry. He is moving back into "The Destined Position of Authority" and this is His task alone, by "My Direction."

God said, "I showed him carrying your bags in the dream to  represent yet again, his "Heart of Servanthood" to you, My Church and the people of America. I have dealt with "My Son Donald's Heart."

He will NOW rise to His Rightful Position with the Heart of "His God!" 💙💙💙🔥🔥🔥🇺🇸🇺🇸🇺🇸🇺🇸

In Obedience to God Alone, 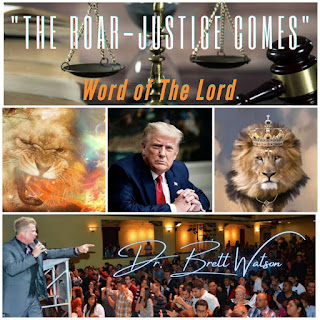 9:58 PM 06/01/21 . 🔥🔥🔥🔥🔥🔥🔥🔥🔥🔥 Thus says the Lord, The Time alotted for Repentance, has now expired as the last grain of sand has fallen through the Hour Glass. I have gone through the earth and weighed the church! I have measured you, says the Spirit. Many have been found wanting! They speak with religious tones and their actions speak louder than their words. As was with My Sampson in centuries past, gone by -  They shake themselves, yet their is no power, no anointing, no conviction and miracles aren't even petitioned for.  They don't know "My Presence" has now left them, for they do not know me.  I have weighed the scales and will now bring forth justice and the harvest to each, for all seeds sown in previous seasons, good and bad. The "Weight of My Glory" will now come and expose from the highest lofty place to the lowest, bringing forth a "Spirit of Humility and Repentance!"  I Am moving across this land of America giving to each the
Read more

The Power of Sight!

Perception [ per- sep -sh uh n ] –noun The act or faculty of apprehending by means of the senses or of the mind; cognition; understanding. Immediate or intuitive recognition or appreciation, as of moral, psychological, or aesthetic qualities; insight; intuition; discernment: an artist of rare perception. The result or product of perceiving, as distinguished from the act of perceiving; percepts. Psychology. A single unified awareness derived from sensory processes while a stimulus is present. (The American Her itage Dictionary of The English Language - Third Edition - Houghton Mifflin Company 1992) My own definition of Perception -Is to see beyond your present moment of existence or circumstance into your desired end! Today I thought about my own desires of the many years I have waited for specific dreams to become a reality in my life. I know when I hear God's voice, as He has spoken the promises of a great future. I know when he s
Read more 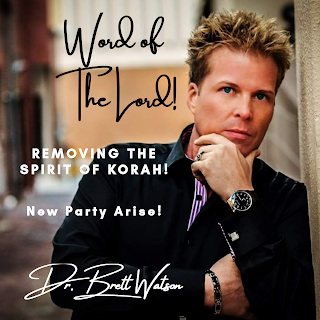 01/24/2021 1:35 - 3:05 PM The Lord Says: "For I have drawn a line in the sand, and those who chose to oppose Me have crossed that line! A Great retaliation from heaven shall now be their portion. I will cause their Pride to be their downfall as my Word declares! Their evil works shall now be exposed by the light. There will be no escaping My Judgement!  Those that You see now - As they have placed themselves in the highest positions of this land, will only remain for a moment. They have chosen to seat themselves, But I say, Nay - For I did not position you there, nor do you have favor with Me! I say, You opporate in darkness and hidden evil works! I will have no part of you! I choose who I raise up and who I bring down. As in the days of Moses, as Korah gathered together a party of opposition to come against My servant, I say in the same way, you will see this demonic spirit and all its opposition removed!  For I have declared, Touch Not Mine anointed, do My prophets No Harm.  My
Read more