"I Am Back-Handing Both Parties!" 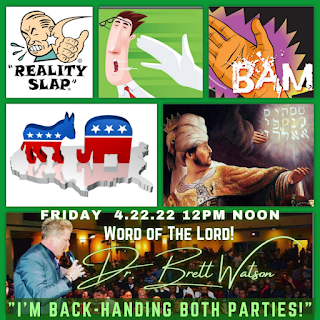 "I Am Back-Handing Both Parties!!"

They are luke warm and I will spue them out of My Mouth! As the writing was placed upon the wall, with My Hand for those at Belshazzar's party and feast of Mockery to Me - I say, Watch Now as both Parties will see My Hand as I Bring forth Judgement!

I will now back hand and slap the instability out of the Republican Party as I expose their lies! Those who dance on one side of the fence and then another, with instability - As a double minded man is unstable in all of his ways! I say, A forceful blow will now occur and I will cause the fakes and liars to be removed!

I will slap the democratic party and cause major disruption and chaos to come to their party. I will expose all and will cause a massive shake up to occur, as they plot against My own and Lie blatantly to My People! They do not hide their ways, nor their allegiance to the lord of darkness - Lucifer! I will expose for all to see. The blood that drips from their hands, will be known!

As one domino falls, many will fall, and another and another until there are no more standing! I will cause another Whistle-blower to arise and much will be seen from hidden messages and plots against the American People.

Enough! I have watched in disgust, as they have operated in darkness with their hands in hand with Satan! They openly and arrogantly speak of their acts with no remorse.

But, I say, I will have My way and the corruption will be exposed.  They rant and rave and grin in arrogance shaking their fists in My face, as they plot to do this and that! I say, enough! I will bring an end to their diabolical plots and strategies!

I Shake all that can be shaken and will expose all! It is Time and it will begin, as a tremor grows in strength,  again and again, until the major shaking occurs!

Georgia, Prepare Now for who you see in many of these current offices Republican and Democrat, will be soon removed!

Exposure comes to the deceitful lies spoken and done in secret! I will disrupt this chaos and cause Georgia to return back to the place of "My Glory" that I have intended for her to be.

Woe to those who stand in their pulpits and speak against "My Will" and make "My House" a political spectical, according to their own agendas! Watch who I will remove in this hour!

For they speak "My Word," to sway the people with lies. They use "My Platform" for their own gain as their hand is deep in the democratic party with dirty money and covenants made with darkness.

I see all, Declares the Lord, And nothing will remain hidden!

I say, "My Major Event" is Now coming and there will be "Shock and Awe!" Hold on to Me now and do not fear! Now is the allotted time!

Watch Now and Prepare! It is Time for My Great Reveal! I say, those who you see today will be removed and seen no more!

The day of Judgment and Exposure Begins, says the Lord!"

The Shift of All Shifts - Look To July! 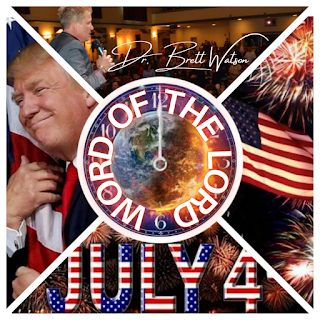 June 30, 2021 - 1AM  - "Word of the Lord" " For You are about to see Me shift the whole Paridigm in a "Magnitude Shift" unlike anything You have ever seen, says the Lord. For as I said, "I would cause a Sudden Boom, have you not seen as the Flower has already began to bloom?" Pay attention and watch, keep your eyes clear, continue steadfast and unmoveable for My Spirit is so Near!  Watch Now and on into July, Oh Give Me Praise, for Now is the Time to Rejoice and come out of the caves!  Celebrations shall be experienced as July Fourth shall come with a Bang, The skies above and torrential rains! The Release of Blessings has Now Come!!!!   For I will bring "Miraculous Miracles" - Those who've been in bondage, handicapped and bound by life event's, wheel chairs, financial woes, who have cried out to My Son, I Will Now break Free and they will begin to Run!!!! I am pouring out My Glory and All will see and Know, I Am the God of Miracles
Read more 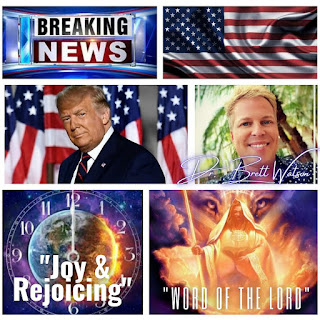 Ladies and Gentlemen, Tonight as I was in the shower with shampoo in my hair, God interrupted me as He does so often and began to speak the following word to me. I only share this to reveal to you that God is NOT religious and speaks whenever He wants too. But we must have the ears to hear him, being sensitive to Him at all times and then the most important - Obey. No matter what! I got out of the shower as quick as I could to get my phone and begin typing what He was speaking. Honestly, I have never rhymed prophetically before in all my years of ministry until the last few months as God has given these words to me.  I am in awe of what He is doing and how He is speaking to me personally.  I give Him All Glory and All Honor and as you read below, we will all Rejoice Soon! 🎊🎉🎊🎉 In Awe of His Sovereignty, Dr. Brett Watson   Www.BrettWatson.tv 11:45 PM July 1 - 12:20 AM July 2, 2021 God said, Brett watch Now as I take down the imposter -  satan's tool from off his stool. Those w
Read more 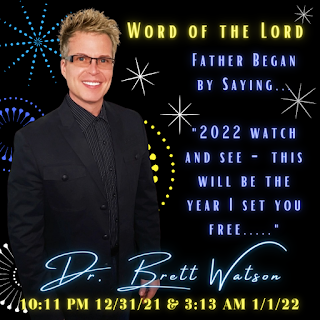 Ladies and Gentlemen,  At 10:11 PM on New Years Eve (12/31/21), Father began to speak in Rhyme a Powerful Corporate Word! I began typing the Word as Quickly as He was speaking it.   He ended the Word and then continued it, with Part 2, as He woke me up at 3:13 AM on 1/1/22. The Word begins as follows, Praise Unto Our Amazing God!!  Get Ready!!! It's Our Time! Dr. Brett Watson  "Word of the Lord" - Part 1 "2022 watch and see - this will be the year I set you free. The time has come for all things new, the enemy has done all to keep it from you, but I say, its here and I Say enter in, its the new and time for new beginnings!  Restoration, Recompense and Vindication too, the Release of Wealth, Treasures and Breakthough I give to you! It will be an Era as never before, My Kingdom Comes and All shall be restored. The king of Glory shall Now come in, I will cause millions to come to me, I will free them from there sin. For New I say in every way, the time has come  For My
Read more